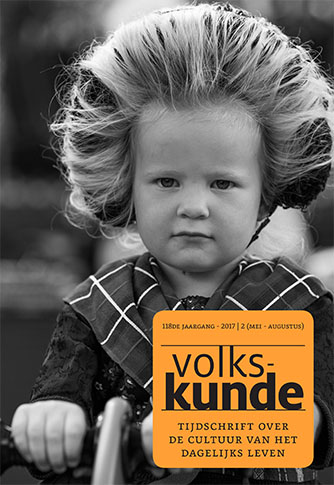 “The White Wrap Speaks For Itself”
Dynamics and Prescriptive Order in the Traditional Dress of Staphorst, c. 1950-2017
It is not for the first time that the people of the village of Staphorst in The Netherlands make out the subject of an article in Volkskunde. In 2017 a substantial but slowly diminishing number of women still wears the lo¬cal traditional costume every day. The costume tells us, among other things, whether they mourn about a beloved person or an acquaintance. The unwritten rules how to mourn help these women to cope with the situation in a manner they know well. On the one hand the mourning dress imposes a straight jacket. Their so¬cial network appears a factor not to be missed. One’s clothes are a major preoccupation, but many people seem even more preoccupied with someone else’s costume. Despite the rules, one has a certain freedom to apply them to one’s own ideas. This article de¬scribes how the rules are becoming clearer when not followed correctly. Many examples from everyday life in Staphorst, starting from a period of preparation before a burial to the mourning period thereafter, makes clear that there is a layered set of rules for mourning. One may shorten the period of mourning, or alleviate the rules themselves. A mourning dress may also be chosen based on social or religious needs. No need to say that a creative use of rules is talked about in
the village, even if one doesn’t strictly apply the rules, for instance because of a lack of a group to provide social feedback. The women wearing a tra¬ditional costume will often be the last and only members of their fam¬ily adhering to this habit. There are no mothers and daughters to correct them.
In this way, this article introduces the reader to a group that seems to stick to common ways of coping with be-reavements within their way of cloth¬ing. However, their regional and reli¬giously inspired rules give the women of Staphorst a certain freedom to cope with a situation in their own way. This article thus provides a fascinating in-sight into the mentality of a Dutch re¬gion, and into the implications of this mentality in clothing.

Folklore and Medicine
A 19th Century Struggle Against Superstition
In the late eighteenth and early nine¬teenth century folklorist research became popular throughout Europe. The research purposes varied widely. Whereas in Germany folklore was mostly used to revive and conserve folk culture, its foremost purpose in the Netherlands was to repel superstition. This article focuses on an enquiry into superstition conducted by J.C. de Man, a doctor from the province of Zeeland.

De Man sent out letters containing several questions regarding supersti¬tious beliefs to several correspondents in Zeeland. Although his resentment against superstition is clear, De Man never specified the specific purpose of his research. The only remain¬ing results are two lectures about divination in Zeeland. The study of these documents and two additional lectures from De Man on medieval diseases and demographics in combi¬nation with the remaining correspon¬dence from the inquiry have allowed me to look into De Man’s motivation for his inquiry, as well as his inspira¬tion. One of his correspondents, J.P. Snoep, had been participant in a prior inqui¬ry of the Nederlandsche Maatschap¬pij tot bevordering der Geneeskunst (NMG) into superstition. As De Man was in the same medical association as Snoep, he must have known about the inquiry and it is therefore very likely that it must have been a ma¬jor source of inspiration. It becomes clear from his lectures that De Man sees superstition as a threat to medi¬cal progress and success. As a doctor he experienced the devastating effects of epidemics in Zeeland, which must have motivated him to take proactive measures in any relevant field. Conse¬quently, De Man’s inquiry should be seen as a survey of the threat towards medical progression, the threat being superstitious beliefs.