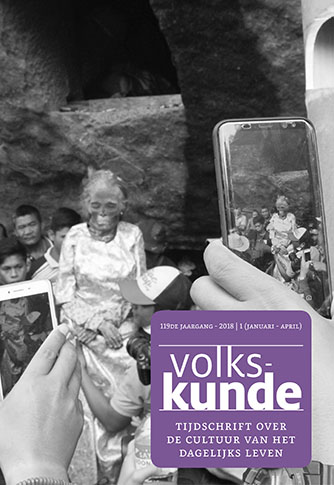 Thijs and the study of devo¬tional prints
The late professor Alfons Thijs was an expert in the field of devotional prints from Antwerp (17th-19th Cen¬turies). After his death the university library of Antwerp acquired more than 1.000 prints, related to the city. The library made its ‘Thijs Collec¬tion’ available on line http://anet.be/ opac/opacuactobj. The first part of this article stresses Thijs’ scientific research and publications and shows Thijs as a collector of all sorts of devotional prints. The second part is devoted to the history of the research of this print work. It starts with Adolf Spamer’s Das kleine Andachtsbild vom XIV. bis zum XX. Jahrhundert (1930). The first study dealing with Antwerp was published in the same year: Les images de dévotion anversoises du XVle au XIXe siècle by Emile Van Heurck. They mainly studied their object in a ‘rather’ traditionally historical way: printers, print methods, iconography, taxonomy and functions. Since the turn of the millennium and the rise of ‘material Christianity studies’ de¬votional prints are looked at in a new way: the focus is now on the function¬ing of the object in everyday life and in the construction of the religious identity of the user. The article closes off with the presentation of some new research results of this recent meth-odology.

Learning by attention
Visiting and commemorating the dead in the Aymara culture and the Low Countries
The text starts with a short compara¬tive reflection – commemorating the dead in the Low Countries versus what indigenous groups do in “the Andes”– and gradually concentrates on visiting and commemorating practices among Bolivian Aymara families, in order to reflect upon some philosophical-anthropological considerations about what social life might be, in its broad¬est sense. In a concrete way, this ar¬ticle is about their visiting, honouring and commemorating the dead (and in a certain way also being visited by them). It will show how “the social component” always is intimately en¬tangled with “the ecological element” in an ever-extending meshwork of life-embracing relations, much clear¬er than in our traditions. The article analyses how the Aymara carry on their lives –“socialize”– in intense and attentive ways, not only with their guiding ancestors but also, in a very related way, with other inhabitants and elements of the world, such as animals, sacred places and protecting mountains. This proposal also urges us to ask ourselves about the learning dynamics involved here: how people, through these visiting and com¬memorating practices, learn to cul¬tivate and cherish “attention” for the interwovenness of all life processes and for the way human life lines “cor¬ respond” with other lines of life. This “attention” is vital in many senses. Both questions, the entanglement of the social and the ecological elements and the education through attention-enhancing practices of exposure, can be asked about other places, such as Flanders and the Netherlands, taking into account the different contexts, elaborations and accentuations.

Ma’nene’ or how to keep the dead alive?
In this article the author brings us to Toraja, a mountainous area in South Sulawesi (Indonesia). The ancestral belief of the inhabitants led/leads to extensive funeral rites. The Dutch col¬onisation from the beginning of the 20th century onwards slowly but sure¬ly influenced these rituals. Still, the touristic scene discovered this place in the seventies and since then Toraja is a well visited region, due to these still extensive rituals, as the tourists are welcome at the burial feasts. Recently, tourists are now also visiting a ceremony that was largely a private matter. During the ma’nene’ ceremony the family of the deceased take the coffin out of the tomb to clean the grave. Meanwhile they open the coffin and give the mummified corpse new clothes, food and ciga¬rettes. At the end of the ceremony the coffin is put back in the grave. The fact that this kind of second funeral is being promoted as a touristic high¬light by the local touristic office can either be a danger or an opportunity for this ceremony.
The author explores how dark tourism and ma’nene’ can influence one another in a region where Christi¬ Christi-anity is the major religion, but where the inhabitants also keep up some of the ancestral rituals, closely connect¬ed to religion.

Intangible Heritage & The Muse¬um in an age of superdiversity
In this article the authors focus on the question of how museums can find new roles in a more (ethnically) diversified society. The challenge of what English sociologist Steven Ver¬tovec has called the challenge of su-perdiversity is huge. This refers to a new demographic reality, a diver¬sification of diversity in which city populations are more dynamic than ever before. Where until recently the challenge was mainly restricted to the integration of a limited group of mi¬grants in a dominant ‘white’ heritage discourse, we now see much more di-versification in which the notion of majority versus minority cultures is no longer relevant.
For the intangible heritage sec¬tor the focus on superdiversity opens new perspectives to interpret intan¬gible heritage from a more dynamic, global perspective – heritage that is always on the move and becomes meaningful in ever changing fluid contexts. This focus shows that intan¬gible heritage is NOT being carried by stable homogeneous groups, „dis¬tinct from the rest of society and lost in time”, as Ramon de la Combé once provocatively formulated it. Instead, heritage is about dynamics, flow and fusion. It is determined by multiple perspectives. For museums the focus on intan¬gible heritage may open ways of deal¬ing with superdiversity. The focus on intangible heritage implies a shift from ‘heritage preservation’ to ‘safe¬guarding heritage’ and ‘heritage in the making’, and a shift from ‘heritage of the past’ to ‘heritage in the present and future’ – for intangible heritage is by definition contemporary, dy¬namic culture. ‘Participatory collect¬ing’, ‘connecting people’, ‘listening to multiple networks around intangible heritage’ and ‘being part of these net¬works’ are the important key words. Through co-creations between museums and the bearers of intangi¬ble heritage museums can support the safeguarding of heritage while at the same time they will draw attention to the superdiversity of society. Co-creation offers opportunities to nego¬tiate intangible heritage among dif¬ferent stakeholders (amongst which the museums themselves) and to de¬velop heritage for the future. It is an open ended, experimental approach towards intangible heritage, for what we would like to call a network-labo¬ratory approach.