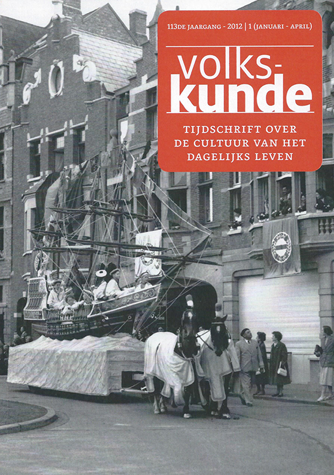 Staging urban history:
Festivities and the creation of historical townscapes in Belgium (1860-1958)
Parades were an intrinsic part of ur­ban life in Belgium between the mid­dle of the nineteenth and twentieth century. Scholars have used these fes­tivities time and again to probe into nationalism and the growing politi­cal tensions. However, much less at-tention has been paid to the relation between these parades and the town­scape itself. This paper tries to fill this gap by exploring how urban festivi­ties can unveil the differing ways in which small-town populations coped with the dilemma between moder­nization and preservation (or even creation) of a historical townscape. Sometimes parades were simply felt to enhance or complete the existing medieval outlook of the town (e.g. the age-old Procession of the Peni­tents in Furnes). More frequently ho-wever, these urban festivities seemed to negotiate between history and modernization, as they were often held simultaneously for the inaugu­ration of infrastructural works (like quays, bridges or railways) and in­terventions enhancing the historical townscape (such as the restoration of monuments). This reflection on the historical townscape was further ma­terialized in floats portraying urban
monuments, the temporary recon­struction of demolished buildings such as town gates, the selective il­lumination of certain buildings and town quarters, and the routes of the parades. As such these festivities re­assured the inhabitants and made them come to terms with the moder­nization of their hometown.

Trimming the roots of Dutch Identity
Discovery and assessment of pseudo-historic painted furniture
Painted furniture, together with regi­onal costumes, play an important role in the identity of Dutch communi­ties in the 17th -19th centuries. From about 1870 onwards, historic societies, artists, antique dealers and museums have collected painted furniture as relicts of the pre-industrial material culture of our ancestors. However, the age, provenance and authenticity of these pieces have never been re­searched scientifically. In the course of a PhD research project virtually all painted furniture in Dutch mu­seum collections have been studied. Wood type, tool marks, nails, hard­ware, paint stratigraphy, evidence of use, restoration and alteration were assessed. On top of this the binding media and pigments on some pieces were analysed, Röntgen and infrared pictures were taken and dendrochro­nology techniques applied.
Among the pieces that were supposed to date from the 17th or 18th century, 63 turned out to have a pseudo-histo­ric early 20th century decoration. In fact the history of the majority of the­se objects couldn’t be traced back any further than World War II. During and after the war a great many formerly unknown objects without a clear ow­nership appeared in auctions. In the flow of objects at the time these pie­ces did not raise any eyebrows. On the contrary, after the devastation of the war they were embraced as rare survivors of the ancestral material culture of farmers and fishermen. In fact these pieces rather illustrate the nature of the antique trade at that time and the material culture of the elite who attended these auctions loo­king for tokens of Dutch identity.

Ethnomatics: Political and Scientific Programme
Working with Navajo Indian infor­mants in Arizona, USA we became aware of the capabilities of children and adults to find their way in vast and clearly ‘chaotic’ canyons. One thing we did was describe what peo­ple actually did and said about their ways to find the way back home in such contexts. A second one was to use these data in order to build a cur­riculum book for a bicultural school on the Navajo reservation. We start from this example to ask what the political choices are, which we con-
front when working with such mate­rial: how much mathematics (or is it Mathematics) is needed in daily life? And what mathematics should we promote or develop, without beco­ming colonialist again? In section 2 we discuss the meaning and the sta­tus of ethnomathematics, proposing that it would be the generic category which allows for a more systematic and comparative study of the whole domain of mathematical practices. In section 3 we introduce the concept of multimathemacy (after multiliter­acy) to discuss the political agenda of ethnomathematics. We argue that multimathemacy should be the basis of the curriculum in order to guaran­tee optimal survival value for every learner.