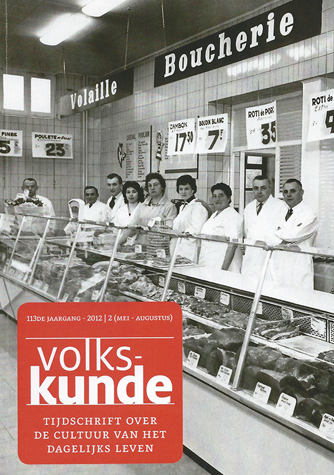 Summary: A history of the evident: the Story of the Refrigerator
Nowadays a refrigerator figures as an unspectacular and banal dimension in everyday life. In fact, it has been taken for granted by most of us. But since it was introduced in the last century it has affected (post-war) consumer society, changed lifestyles and social relations (e.g. between partners), etc. Furthermore, the refrigerator has had direct implications on how food is bought, preserved, prepared, and eaten.
In this essay several themes are dealt with. The basic assumption is that the refrigerator not only occupies a central place in our household but that it is also an active medium in changing customs. The introduction of one single technological object and its significance as regards e.g. food preparation and preservation are discussed. The way that these themes were researched (and the discourse created around it), especially in Belgian literature, is also addressed.

Summary: The ‘Dutchness’ of the Dutch: a new project at the Meertens Institute
In September 2012 the Meertens Institute will start a new research project focusing on the rediscovery of ‘Dutchness’: all the recent constructions (political, intellectual, artistic or commercial) in which what is felt as ‘typically’ or ‘authentically’ Dutch are again promoted, celebrated or commercially exploited. Partly related to the initiatives of several

Dutch governments to strengthen the nation after 9/11 and the politically­inspired murders of Pim Fortuyn and Theo van Gogh. Many other constructions of ‘Dutchness’ may be found in intellectual, artistic and commercial circles, including those of the fashion industry and the creative industry.
Interestingly, similar developments have been observed in e.g. Germany, England (with its new constructions of ‘Englishness’), Denmark (‘Danskhed’) and a couple of other European countries. Ironically, they all seem to introduce new forms of cultural essentialism, despite the efforts of many anthropologists, ethnologists and other social scientists to fight such essentialism both in society and in their own way of thinking. In the report the project’s background and its main features are sketched.

Summary: The emergence of deaf culture in Belgium: Reflections on the Role of Sports Clubs
Disability culture and disability identity have occupied a more prominent place in society since the disabled no longer accept being treated as medically depend­ent, destitute or even pathological persons.
In Belgium the awareness of the specific identity of the deaf has been growing since the turn of the last century. Inspiredbythe French scholar Séguillon, the author researched the role of sports. He questioned the idea of a generalized identity of the deaf by focusing on particular differences and internal frictions. He also wanted to fathom their resistance as regards the normalizing procedures in education and in society at large.
His historical inquiry leads to the suggestion that the current disability theory is in need of a less rigid approach. Emancipation cannot be achieved without a firm, stable and encompassing identity and culture.