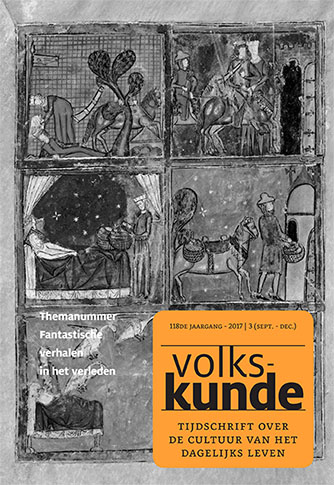 Fantastical Stories in Plural:
or, The Reach of Giants
Historical narrative research is increasingly facilitated by internet sources, especially in the Netherlands where a service like Delpher (a combination of “delver” = miner, and “Delphi” = the oracle) provides access to millions of pages from historical newspapers, journals and books; the latter also includes the dbnl (digital library for Dutch literature). With all these newly accessible texts, attention to contexts tends to suffer. While this introduction merely mentions issues like literacy and multilingualism, it explores stories about giants (very tall human-like beings) in some detail. It concludes that they were mentioned in the Bible and chronicles, thus belonging to the category of belief, but also the subject of hyperbole, particularly in relation to the creation of the landscape. Stories about giants were situated between “belief” and “jest”. In the course of the eighteenth century, and for some as yet unknown reasons in the Northern rather than the Southern Netherlands, the balance between the two shifted towards “jest”. It is suggested that this field of cultural tension may also provide one of the contexts in which to understand the issues which are subject to the other contributions to this volume.

An unlikely story:
The Latin ‘fairy’ tales of a medieval Cistercian
Throughout literary history, fairy tale-like stories have frequently met with resistance from critics who deemed their playful disregard of historical-empirical realism unfit for more “enlightened” readers. Meanwhile, authors of such stories have often anticipated and responded to this line of criticism in their writings so as to vindicate them(selves). The present contribution discusses the particular case of the Latin framed tale compilation Dolopathos, sive de rege et septem sapientum (Dolopathos, or the King and the Seven Sages, 1184-1212), written by the Cistercian monk John of Alta Silva. Among its embedded exempla, it also features a marvellous story about supernaturally descended children who are victimised by their wicked grandmother and transformed into swans. Through a multi-layered analysis of this story, its encompassing frame narrative and the pro- and epilogue that accompany the entire work, this article aims to shed light on the sorts of methods writers such as John have relied on to imbue their creations with an aura of truthfulness and put them to a specific use, in this case of a religious-monastic nature. These include the introduction of morally exemplary elements to a given story, the fictional dramatization of that story’s truthfulness in the specific context of its frame tale, and direct interpretative and literary-theoretical reflections by the narrator/author – all of them methods that would be employed again by fairy-tale authors in centuries to come.

Flying Carpets in the Arabian Nights:
Disney, Dyâb … and d’Aulnoy?
In May 1709, 19-year old Hanna Dyâb told Antoine Galland a lengthy story about Prince Ahmed and Pari Banou, which Galland subsequently took into the final volume of his Mille et Une Nuits (1704-1717). It was a straightforward fairyland fiction that played out in two worlds, one Pari Banou’s enchanted subterranean world, the other the ordinary world of Prince Ahmed, his two brothers, and their father. The first half of the tale, which involves competition for a bride, is resolved amicably when the three brothers cooperate to heal their cousin. Three magic objects are involved: a telescope, a flying carpet, and a healing apple.
Hanna Dyâb’s flying carpet, like “Prince Ahmed and the Fairy Pari Banou” as a whole, has no antecedent in Arabic narrative tradition. It seems to have been Dyâb’s own invention. That is the first surprising conclusion. The second, however, has to do with the imaginary from which a flying carpet may have emerged. Since “Prince Ahmed and the Fairy Pari Banou” is so heavily dependent for its plot and motifs on a tale by Marie-Catherine d’Aulnoy published in the 1690s, it is reasonable to further examine her oeuvre for motivic antecedents for a flying carpet. Such an examination, in fact, brings to light a likely crossover point for Dyâb’s culturally and literarily consequential creation of a flying carpet, in addition to his utilization of a full thirteen plot and motif links binding “Prince Ahmed and the Fairy Pari Banou” to “La Chatte blanche.” This article confirms and extends a line of inquiry into Western and European contributions to the Eastern Arabian Nights.

Telling through your teeth:
(re-)oralisation of seventeenth- and eighteenth-century literature
One of the bones of contention of present-day folktale research concerns the relation between the written and oral tradition of stories. Especially the “fairy tale” genre, however, provides many examples of written or printed versions which preceded the oral tradition and may well have initiated it. The question posed in this contribution is whether this also applies to other narrative genres such as the joke, the anecdote or the legend. The digitalisation of Dutch books and journals provides rich material for a fruitful exchange between proponents of oral and printed transmission. Seventeenth-and eighteenth-century examples of anecdotes are discussed that in the nineteenth century were deemed to be oral but, in a number of cases clearly derived from earlier printed versions. Could they have been based on older oral versions? Here examples are discussed of ATU 750B, ATU 1527A, ATU 1735, ATU 1293 and ATU 1837.

Dutch newspapers (1850-1950) as legend medium
The study of newspaper legends emerged as a vital research topic in the nineteen fifties and has so far focused on the past half century. The present study explores the potential of digitized newspaper archives to analyze the discursive construction of newspaper legends in Dutch dailies during the years 1850-1950. Emic concepts of Dutch journalists are contextualized in shifts regarding content, genre and work routines of the Dutch daily press. During this period, the most frequently used label for traditional stories of uncertain veracity was zeeslang, i.e. sea serpent. These stories were said to be particularly frequent during the slow news season in summer, the so-called komkommertijd (lit. ‘cucumber time’). Identifying and condemning these stories as false or unreliable served the rhetorical function of bolstering the journalists’ ethos as a credible professional. Discussing sea serpent and cucumber stories, journalists demarcated their routines and output from those of less professional news purveyors (Gieryn’s ‘boundary work’). The most commonly named scapegoat were allegedly money-driven American journalistic practices.

The lover as witch:
A different look at Dutch-language migratory legends on witchcraft
Migratory legends about witches are usually catalogued according to their magical content. In the Low Countries, however, over a hundred of those legends, classified as different “types”, contain the same warning: “do not marry a witch”. This contribution relates the difficulties of finding the relevant texts of the legend “the lover as witch” through ostensibly similar ways of categorising. As far as can be gathered from Scottish and Scandinavian catalogues of migratory legends, this particular theme is unknown beyond the Low Countries. Only in collections from western Germany a few examples have been found. This relativises the migratory in the migratory legend. It also calls for a reconsideration of the way witchcraft legends are classified, especially if they are to be integrated into a broader historical study about the witchcraft discourse. The last sections discusses how the narrative could be used in the way marriages were restricted, as well as the occurrence of the legend in comparison to nineteenth- and early twentieth-century newspaper reports.