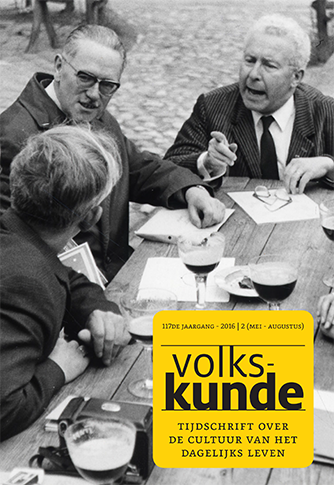 AD DE JONG, Museale passie en Europees idealisme – De jonge jaren van het Verbond van Europese Openluchtmusea 1966-1972
Summary: A Passion for Museums and for Europe – The early years of the Association of European Open-Air Museums (1966–1972)
Anyone who frequently attends the conferences of the Association of European
Open-Air Museums (AEOM) will eventually begin to wonder how this
organization of enthusiastic directors and staff members of open-air museums
came about and why certain matters are the way they are. Why did museums, which are in fact rooted in a particular country or a particular region, seek contacts on a European level? What did they have in common with each other, so that a need arose for experiences to be shared beyond national borders? With this we could also pose the question as to why that need did not arise any earlier than in 1966. The large number of new open-air museums
since mid 1950s, particularly in the German-speaking region, gave rise
to a growing need for an exchange of ideas on methods to be used. By no longer allowing the search for that which is characteristically national
to be the motive for a cultivation of folklore, the eyes of many
European open-air museums were opened to a history of many interactions
and influences in the culture of everyday European life, which went
beyond national borders. Many members of the Association cherished the
idea that they were all one European family and that, with their national
and regional open-air museums, they were in fact creating the components
of a collective European open-air museum.

Summary: From culturally respectable to pleasant films. – The revival of popular comedies in the 1980s and the role of Flemish film policy
This article shows that the official film production policy in Flanders
played an important role in the revival of the genre of Flemish popular
comedies in the eighties. When a film support system was installed in 1964,
the cultural dimension of films, in the sense of their artistic and intellectual
qualities, was dominating the policy discourse and practices. In 1981, after
years of Christian Democratic domination, the Ministry of Culture, and
thus the film policy, was taken over by the Liberals. After a dispute between
the new minister and the old film commission (which advised the minister
on the allocation of government grants to film projects), the latter was
fired and replaced. The replacements of important policy actors marked a
shift in the development of Flemish film policy. Audience-oriented and
commercial-economic motivations became more important, which was
manifested in the support for popular comedies. While the Liberal ministers
were outright supporters of popular comedies, the film commission was more nuanced toward such projects. For the most part, the commission
found the quality standards of the popular comedies insufficient. On the
other hand, these film projects raised economic arguments on the continuity
of film production and attracting private investments, important elements
in creating a stronger Flemish film industry. Moreover, attracting a large audience was a decisive argument.
Connected to this argument, there was a broadening of the vision on what is culturally valuable and thus deserves government support. In addition to artistic and qualitative elements, the entertainment value of the films and the viewing pleasure of the audience were also taken into consideration, which weakened the earlier aversion to popular culture. The popular comedies show that from the eighties on, not only culturally respectable films, but also amusement films without much artistic or intellectual ambitions were deemed worthy to be supported by the government

Summary: How museum traditions locked out immaterial culture, and why it is
hard to do without – Museums and context
This essay focuses on the original connection between art, storytelling and
ritual; a relation that got lost when objects entered the museum. According
to evolutionary research art, storytelling and ritual came into being at the same time. Art then was probably religious. But things changed when
richer people started to collect art and developed cabinets of curiosities as
a synthesis of science of that period. Due to this, objects lost their context
of daily use, but obtained a superior cultural status. This was the start of
the lack of interest for the context of objects. Now the aesthetic experience
became the base of their valuation. And aestheticism was seen as a question
of good taste, free from personal preferences. Gradually cabinets of
curiosities grew into museums, and aestheticism was received with open
arms, but lacking interest for context for a very long time.
Nowadays museums pay more attention to ‘experience’. As a consequence
the actual museum is no longer a place of aesthetic contemplation but a
scene of interactive reflection. Museums as keepers of the memory of others
hold all the cards to bring visitors in contact with peoples and cultures
far away in time or distance. Every museum is a museum of the fellow
man. Perhaps therefore it may be time for museums of world cultures to concentrate on the aspect of perception, to call back stories as well as rituals
to provide objects again with a meaningful context. Such approach could
contribute to more openness towards other cultures. Museums of world
cultures nowadays invite members of producing communities who add new
explanations. They introduce personal stories and rituals adapted to the
museum space. They help to restore the initial relationship between material
and immaterial culture within the museum walls. And so they open the
door to gain insight in the complexity of this world in which we all live together.