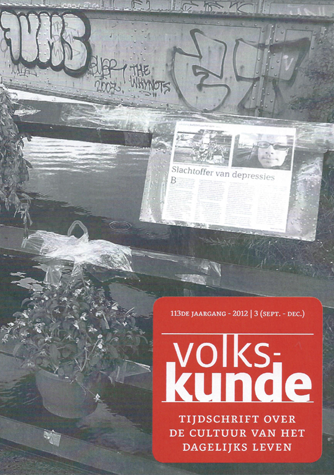 Summary: A place to remember. Memoria, material culture and monastic space in the Cistercian nunnery of Clairefontaine (B)
The Cistercian nunnery of Clairefon­taine was founded in the 13th century by the Counts of Luxembourg. During the 13th and the 14th century the abbey served as the graveyard for this dy­nasty and became a lieu de mémoire in the collective memory, reminding of the success of an elite family that formed the basis for the political and cultural identity in Luxembourg. The long history of the site illustrates the way this memory was perceived, maintained and rewritten by various social groups with different social aspirations. Monastic space and (im) material culture were altered and structured accordingly.

Summary: Commemorating on the place of disaster
Roadside memorials as material expressions of changing mourning culture
Over the past decades commemorat­ing the victims of an untimely or un­natural death in the public domain has become more self-evident, in Eu­rope as well as elsewhere in the world. Evidence of this ‘new public mourn­ing’ (Walter 2008) is to be found in an increasing number of roadside memorials in urban areas and along countryside roads, especially on the scene of the disaster.
Ethnographic research (in the Neth­erlands) reveals the special character of these memorials: in the absence of the body of the deceased and on a particular place not designated by the authorities for this purpose, they visualize the fundamental rupture in the life of the victim as well as of the bereaved. Furthermore, the memorial has a physical and social effect upon its environment. The media and the memorial itself help to understand this new way mourning.
The power of roadside memorials should not be underestimated, which explains the growing number of these memorials.

Summary: Death and the Material World
When we deal with the reality of dy­ing, grief and remembrance, objects and places always offer inspiration to better understand life, death and hereafter: human thoughts and ac­tions have an impact on things and vice versa. In fact, the study of death and loss is a study of the relation­ship between man and his material environment, since the experience of death always exposes and transforms evident ways of dealing with objects and spaces. They may symbolically replace the body that is no longer present.
The historical, anthropological and archaeological contributions to this issue show how, in the Low Countries and in the former Dutch colony Su­riname, individuals and groups used to give or still give meaning to loss and death by dealing with objects and spaces. The articles have a common performative concept of ‘ritual’ and range – in terms of space – from road­side memorials to landscapes, official memory sites and private ones.

Summary: Children imagining and experiencing the battlefield at the end of the nineteenth century
Battlefields occupy a peculiar place in a modern nation’s history and imagi­nation. At the end of the nineteenth century patriotic duty leading to a heroic death was an important ele­ment in the romantic discourse in Western Europe. Waterloo was one of the battlefields that explicitly evoked the national past. Waterloo was not only a place for remembrance but also – specifically for boys – a place for reflection on their own future as citizens and potential protectors of the nation, prepared to shed their blood as their brave forefathers had done before. Therefore, the national soil and its buried heroes did no lon­ger belong to the past, but rather to children’s present. Imagining graves of heroes and children in a gruesome battlefield landscape undoubtedly produced an emotional and political reflex. The premature passing away of an innocent child changed into a patriotic duty of shedding one’s blood willingly. Metaphors of the beating heart spilling vital blood and espe­cially the kinship between the genera­tions of members of the same nation were employed in different contexts in order to represent the battlefield as a way to experience the past and to keep the fallen heroes ‘alive’ in the na­tion’s present and future.

Summary: The price of death. Changing mortuary rituals and transnational care in the Surinamese-creole diaspora
This article depicts contemporary trends in Surinamese-Creole death culture by examining how the sup­ply of commercial services affects the ways the dead are cared for and remembered. The ethnographic ana-lysis will focus on transnational fu­nerals and other rites of passage, and the question how care is materialized under conditions of increased mobil­ity, commercialization and societal changes. As recent trends point to a progressive commercialization, ma­terialization and commodification of Surinamese-Creole death, mourning and burial, the article will emphasize the ways this affects values, meanings and rituals, and, furthermore, how it shapes and transforms relationships between the living and the dead as well as between surviving relatives mutually. In so doing, the article will question the implications of mobility and migration with regard to dying, death and mourning. In particular, it discusses whether or to what extent funerals and other rituals, within a transnational context, continue to act as occasions for reaffirming ties and a sense of belonging or as events that express friction and conflict instead of cohesion, solidarity and harmony.