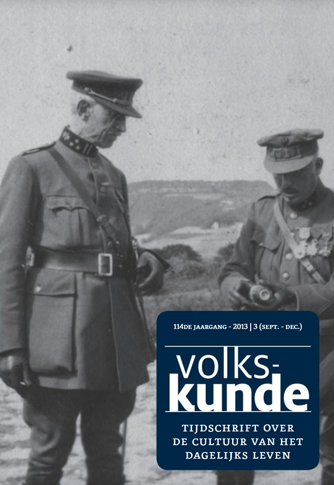 De Belgisch-Nederlandse grens onder spanning
Summary: The 2.000-volt Belgian-Dutch frontier (1915-1918) The German Army built a three-wired entanglement in order to cut off occupied Belgium from The (free) Netherlands. The wire, as it was called, was impressive (more than 350 km long, from the Belgian coastline in Knokke up to little short of Aachen) and it was deadly (more than 900 victims). The impact of the high-voltage boundary on the locals was radical. The usual contacts between family members and friends were cut off or drastically limited. Neighbours in the Belgian-Dutch double villages (Koewacht, Overslag, Kieldrecht/ Nieuw Namen) suddenly became real foreigners because the wires passed through the middle of their village. In many places the new boundary did not coincide with the traditional frontier, which resulted in even more no man’s land with trapped inhabitants, unable to move freely into Belgium or into The Netherlands. The Germans’ intention was to eliminate any clandestine or sub-versive operation along the border. The Germans failed: the border inhabitants offered more active resistance than in the rest of occupied Belgium. Smuggling went on and boomed, especially of goods that were scarce in Belgium. Many people risked their life moving freedom fighters or temporarily providing them with shelter. Others specialized in smuggling clandestine letters for the front soldiers, for the underground or for the Allied. During the First World War the Belgian-Dutch frontier looked like a front, with limited freedom of movement, (contra)espionage, extra – deadly high-voltage wires.

Summary: Shifting thresholds of tolerance: the moral codes of conduct in occupied Belgium (1914-1918)
Too many historians have agreed with the elite in occupied Belgium who used to say that the war experience led to a complete moral disintegration. However, it is doubtful whether it makes sense to look at the war-stricken Belgian society through the (biased) normative lens of moral (dis)integration. It is much more productive to focus on the flexible tolerance levels of the occupied who primarily had to cope with rapidly changing situations. Moral tolerance apparently increased e.g. as regards theft, while it decreased a.o. in relation to usury. Though the appreciation of the so-called moral panic diverged according to the strata of society virtually the entire Belgian population highly esteemed their soldiers. Finally, it is worth mentioning that the different social classes in the occupied country scrutinized each other rather jealously, which illustrates the power of social tensions in occupied Belgium.

Summary: Was the food scarcity in war-torn Belgium solved by rationing and advising?
These last few years interest in everyday life in occupied Belgium has grown and has complemented the well-researched military and political situation in The Great War. It is a fact that food distribution and dietary have hardly been scrutinized. This void in national historiography had to be filled. In 1914 about 80 percent of all wheat was imported. It became a dramatic situation because international transport of food suddenly came to a halt. Furthermore the Germans exacted the greater part of this scarce commodity for their army. In order to avoid a revolt a few manufacturers and businessmen from Brussels (e.g. Emile Francqui) tackled this growing problem by creating the NHVC (Nationaal Hulp- en Voedingscomité, National Assistance and Food Committee) which organized – in practically every municipality and for four years – food production and distribution. The NHVC also had brochures and cookery books printed in order to enable the families to get fed in a healthy and (especially) cheap way. The Committee’s suggestions are worth studying. What type of advice was given? Was there any fine-tuning over the years? Was the advice adapted to the population group, socially or geographically? In which way did the suggestions by the NHVC, the medical profession, dietists and women’s organisations differ from each other? Ego documents give us an idea how the (well-advised) Belgian families coped with the problem of food scarcity.

Summary: Discipline and trench warfare: the Belgian Army in the Great War
How discipline was exactly maintained in the Belgian Army is difficult to reconstruct, because some historians claim that discipline was harsh, with innocent and powerless soldiers, while an other group argues that discipline was rather loose. In some way both interpretations can be reconciled. It is a fact that the Belgian High Command did everything in its power to impose a strict discipline, based on unconditional obedience. However, soldiers were not completely powerless and were able to negotiate many aspects of daily life, including discipline. The result of this never-ending process was a kind of informal discipline, with officers who tried to keep command and care in balance, i.e. corporals and sergeants had to find an intermediate position between what the High Command wanted and what soldiers were willing to accept.